Today’s recommendation on the lira against the dollar

The Turkish lira witnessed some decline during early trading this morning, although the pair remained within a limited trading range. Early this morning data showed an improvement in consumer confidence in Turkey, according to data from the country’s statistics authority. The consumer confidence index rose to 72.2 points in August, compared to 68 points last month. The index hit its highest level in five months. The good data is not expected to be reflected in a large way on the price of the lira, especially after the statements of Recep Tayyip Erdogan yesterday, in which he adhered to a stimulus monetary policy aimed at lowering the interest rate. The forecasts of the Turkish Central Bank, which were published earlier this month, showed that the dollar may rise to levels of 20 lira by the end of this year.

On a technical level Without major changes, the US dollar against the Turkish lira traded near its highest levels during 2022, the pair continued to trade within a narrow trading range, which is shown on the chart. The pair is also trading above the moving averages 50, 100 and 200, respectively, on the four-hour time frame as well as on the 60-minute time frame, indicating the long-term bullish trend. The pair traded the highest support levels, which are concentrated at 18.08 and 17.98 levels, respectively. While the lira is trading below the resistance levels at 18.16 and 18.33, respectively.. The chance of the lira rising against the dollar is still slim as the pair is heading in an overall bullish trend. As each decline of the pair represents a good buying opportunity, please adhere to the numbers in the recommendation, with the need to maintain capital management. 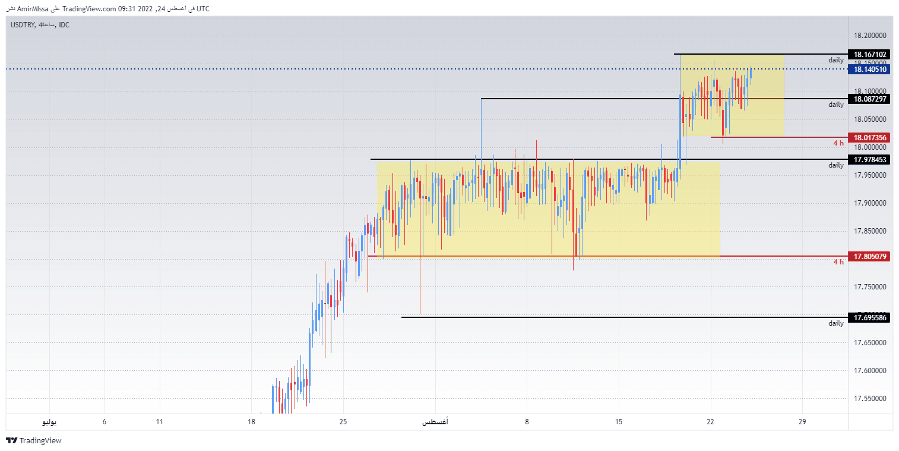