In light of the technical struggle between the most important global decentralized platforms, we see a significant decline in the price of the FTX platform, up to the moment of writing, to 16k, with a sharp decline for months, such as the FTX currency.

And what actually happened is the continuation of the succession of events that correspond to the technical analysis, the expected time of the price drop, so we can say that the decline of Bitcoin at the present time is a natural event for the continuation of the time cycle, and what is happening in succession of events with the decline in events that did not affect Bitcoin, but rather affected On more other currencies, i.e. Bitcoin itself was affected by the time cycle and is basically bearish.

Bitcoin is trading at the moment, to write the article, at the level of 17K, and this level is technically important because it is a decision-making level, so according to the price closing with this level, volume, and averages, the price will be.

In the short and medium term

In the event that the price closed above 17500 twice in a row, with high volume and not too high, it will test 19K levels for the last test (the farewell test), and based on the retest, we will see a violent decline towards 12, then 8K.

In case the price closed below 17500 with a high selling volume and not excessively high, we will see more declines towards 14.

We note that all of the previous scenarios reinforce the idea of ​​a bearish move, except that its limit (the first scenario) is that if it happens, the price may face a strong bearish momentum of its kind, and it may be the last.

at the long term

In many of my previous articles, I said that the price will not start rising unless it touches price levels close to 8000, and this is what we may see soon, as I still have the idea that Bitcoin will reach 100K, but this rise will only start when testing the lowest time bottom and it will only reach At the end of the downward cycle, which is estimated at a year and a half, meaning that the target price has an average age of approximately three years. 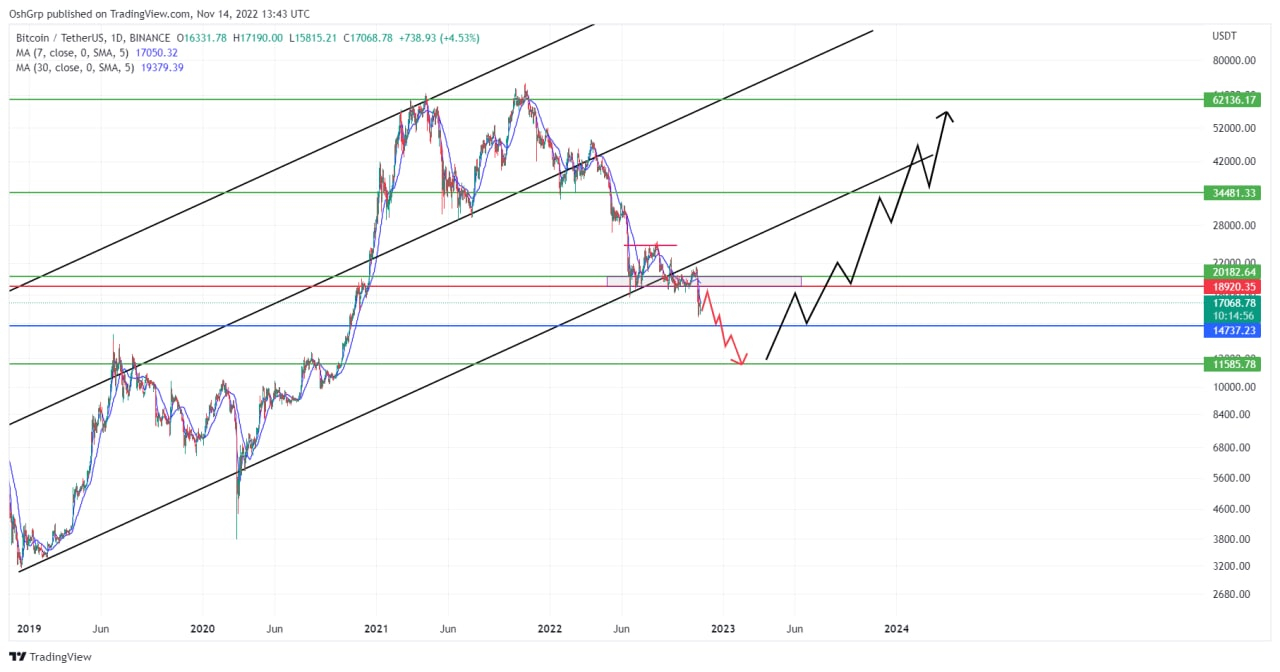 In this period, dear reader, the investor may abound with rumors and justifications that the price will rise again or that the market is in an eternal collapse, and we may see many people who associate events unrelated to technical analysis.

For example, the conflict that occurred between two well-known platforms led to a further decline in the markets. Let us tell you here that what happened is as a result of the price being in a downward cycle that forced this dispute to occur, not the other way around, and this is what will help the markets in the near future to rise away from bogus projects.

In conclusion, I tell you to select your investments and try not to stay away from the famous currencies that are related and extended to other projects such as BTC, ETH, SOLOAN, MATIC, BNB.

As for others, especially at the present time, they may be high-risk investments, as this is the period for liquidating weak currencies.